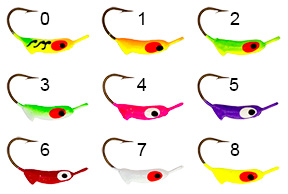 The Slo-Poke Wide-Gap Panfish Jig can be rigged with larger offerings of live bait and plastics than traditional panfish jigs. It’s the perfect jig for the 1” to 2” PowerBait and Gulp series baits, that tend to over-power traditional small hook panfish jigs.

The Slo-Poke Wide-Gap Panfish Jig has a weight centered body that falls slowly and horizontally, not head first, making it the perfect slow-fall swim jig that is skinny in the weeds and stays in the strike zone longer. This phenomenon also produces a more natural swimming action, making it easier for fish to inhale the bait.

The Slo-Poke Wide-Gap Panfish Jig is available in 3/64oz in (9) colors, including Glow-in-the-dark 2-tones, that glow in “color” for periods up to 3 hours on a single charge. 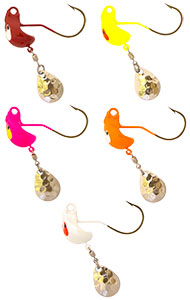 The Odd’ball FinSpin can be fished with live bait or plastics and is the ideal trigger jig for either open water or ice fishing presentations. Odd’ball FinSpins’ can be rigged weedless or with an open hook and work great with dead rigged minnows. All Odd’ball FinSpins’feature a custom designed 1/0, wide-gap, Mustad performance hook and an oversized paint free eyelet, for easy termination and stinger hook attachment.

The Odd’ball FinSpin is available in 1/4oz & 3/8oz sizes and (5) colors including, Chartreuse (glow), Pink (glow), Orange (glow), White Pearl and Blood Red.  All jigs have UV, Ultra-Violet properties. Glow-in-the-dark jigs, glow in “color” and last for periods up to 3 hours on a charge. 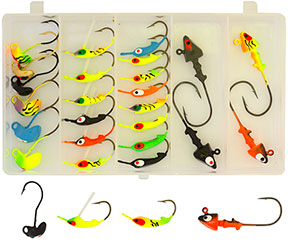 The Northern Wisconsin Jig’n Kit consists of popular jig styles including, the original Slo-Poke Jig, Odd’ball Jig, Slo-Poke WeedMaster and the new Slo-Poke LS (Long Shank Jig).  These jig designs are perfect for the structures found in Northern Wisconsin Lakes, including weeds, timber and rock.  All jigs can be used with a wide variety of live bait and plastics (not included) like the popular Gulp and PowerBait products. Fishing tips and information on which jig to use and when, plus helpful rigging diagrams are included.  All contents and information are enclosed in a compact Plano Utility Box.

For additional information on our full line of products, see our website at www.baitrigs.com

Up Down and Sideways

By Rob Kimm and Pete Maina

From The Next Bite – ESOX Angler Magazine 2006 Fall Issue

Anglers in general, and muskie anglers in particular, have an utterly unreasonable view of angling techniques. We see lures and the techniques used to present them as essentially progressive, a perpetual press of improvement over what was done before and how, and with what, to the point where if you aren’t careful, you can catch yourself looking back at the past wondering how they managed to catch a thing.
This belief in continual progress is, I suppose, an unspoken argument for the absurdities one sees from time to time: spinnerbait skirts made from space age carpet fibers, bucktails the size of wombats, super magnum plugs that weigh in at a pound and change, wiggly rubbertailed gee-gaws beyond number. It may even explain the khaki-clad sport I ran into on the water a few weeks back who asked if I might have a black Magic Marker in the boat so he could dull the finish on his blades just a bit. Shiny blades, apparently, are last year’s news. 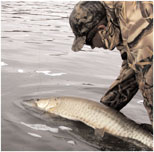 Admitting this irrational view on lures is a roundabout means of apology for writing about something as mundane as jigs and jigging, when this inevitable innovation leaves so many other topics unexplored. The reality, though, is this: the fundamental building blocks of presentation haven’t changed, and wont. Speed, depth, color, and size, attraction, and triggering ability are still at the core of even the most innovative lures or methods of presenting them. The belief in progression is simply an example of endless variations on fairly basic themes, with varying degrees of success or failure. It’s a reason to slink through the tackle shops like grave robbers each spring, looking for the next new thing.

But jigging gets scant attention from the vast majority of muskie anglers. Perhaps it’s that assumption of progress that gets in the way. Because jigging is certainly nothing new when it comes to muskies.

Truth be told, jigging could rightly be called one of the first modern muskie techniques, tracing its roots back to the dawn of modern angling, when anglers like Tony Portincaso, a pair of young, energetic Chicago area anglers named Al and Ron Lindner, and a handful of others began fishing early version of today’s soft plastics on Deer, Bone, and a handful of other Polk County, Wisconsin lakes.

“Tony and a few other guys from the Rockford, Illinois area started using 5-inch Reaper for largemouth bass on those Polk County lakes,” says legendary angler and Lindner’s Angling Edge host Al Lindner. “Lo and behold, they started catching lots of muskies. That is truly where it began. At first they thought it was just a fall thing when the weeds were thin, but the system developed over time. We got bit off, so we added leaders, then graduated to bigger baitsthe 8-inch Reapers , fished on spinning gear with monofilament and fairly short wire leaders.” As the system evolved, jigs were not only lures but interpretive tools, used to probe weedlines and discover points, inside turns and rock piles that had previously been invisible. In experienced hands, a jig was—and is—as precise and informative about what lies beneath the water’s surface as the most sophisticated modern graph. 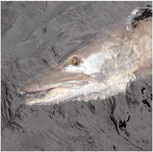 From Deer and Bone, Portincaso, the Lindners, and others, began to expand jigging into new territories. “It worked everywhere we tried it,”says Lindner. “There were guys on Pymatuning catching muskies on jigs like crazy; it worked in Minnesota too.” Publication of the technique in Fishing Facts magazine was a landmark in modern muskie fishing. “It really was a major breakthrough,” said Lindner. “This was still the ‘fish of 10,000 casts,’ and we were catching 3 to 5 a day. Guys wouldn’t believe it when we told them how many fish we were catching.

”Still, despite its long history, not to mention its effectiveness, jigging for muskies has seldom sustained more than isolated regional popularity. Though it has enjoyed a resurgence of late, due in large part to an excellent series of articles on the subject by In-Fisherman Editor-in-Chief Doug Stange, jigging is still overlooked by most muskie anglers. At best, it’s a cold front technique, and at worst it’s ignored altogether. “As far as a presentation system,” says Lindner, “it’s still under-utilized.”

Vertical jigging gets even less attention. Once again, outside isolated pockets scattered across the muskie’s range, vertical jigging for muskies is next to unheard of.

Jigging, you see, is—or can be—more than just a different presentation choice. Jigging can be a system for approaching angling situations where each aspect of presentation, each block, differs from more standard muskie tactics. There are few angling situations, especially in the cold water period of fall, to which jigging techniques can’t be applied effectively. There are some situations where nothing’s more efficient and effective.

What follows are two looks at jigging up fall muskies…